You Tube - The New Cinema Incubator

On December 4th, 2008 I posted on my blog "An Anthropolgy on You Tube", a video by Michael Wesch, an anthropologist from Kansas who presented a talk to the Library of Congress about the sociological effects of YouTube.

A comment about Wesch's presentation, written by Jennifer Hightower on filmmaker.com has anticipated the incredible investment in a five-minute short film posted on YouTube.

"Wow
The video was really long, but eye opening. Anyone who is a filmmaker should watch this, because this youtube phenomenon effects us all. So now, has the the notion of a filmmaker completely changed? Youtube is proof that high budget movies, and A-list actors do not necessarily a great film make. As film makers we are faced with the very real question of wether we will ignore this new phenomenon, or embrace it. To ignore it would be a great error, I think, because to ignore the power youtube on our society, is to ignore the needs of our audience. There is a huge gap between high budget films (and even Indie films) and films that are circulating on youtube. If someone could figure out a way to bridge that gap, I think that person would revolutionize media as we know it. It's an idea that deserves consideration sooner rather than later, because it seems to me that there is going to be an inevitable change in the way we make movies all together, and anyone who is stubborn about the change is going to be left behind. Not since the introduction of talking motion pictures has something so profound hit the publics interest, and it's very exciting!"

One year after my post, the notion of a filmmaker needs a new definition.

Ataque de Panico, a film by Fede Alvarez - A budding filmmaker from Uruguay, whose $300 low-budget alien invasion short became a viral video hit, has landed a $30-million US movie deal in Hollywood. 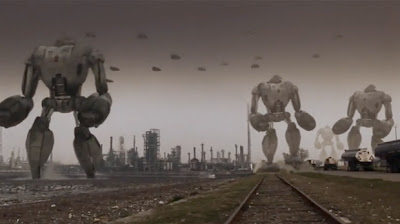 Many thanks to my filmmaker friend, Tanyeno Wotorson (Honor Pictures) for sharing this historical news with us :)
Posted by Andreea Diana Tanasescu at 8:14 PM 1 comments