A film that it was dropped into the London Film Festival at the last moment.

SonyPictures:
"From Academy Award® nominated filmmaker, Charles Ferguson ("No End In Sight"), comes INSIDE JOB, the first film to expose the shocking truth behind the economic crisis of 2008. The global financial meltdown, at a cost of over $20 trillion, resulted in millions of people losing their homes and jobs. Through extensive research and interviews with major financial insiders, politicians and journalists, INSIDE JOB traces the rise of a rogue industry and unveils the corrosive relationships which have corrupted politics, regulation and academia. Narrated by Academy Award® winner Matt Damon, INSIDE JOB was made on location in the United States, Iceland, England, France, Singapore, and China."

My eyes are on Wim Wenders this weekend. And it seems that we share the same love .
From Wim Wenders website:
http://www.wim-wenders.com/movies/movies_spec/lisbonstory/lisbon_story.htm
Our story starts with a postcard and a rather cryptic message:
"Dear Phil, I cannot continue m.o.s.! -- S.O.S.! -- Come to Lisbon with all your stuff a.s.a.p.! Big hug, Fritz."
Who is who? And what do all those abbreviations mean? The SOS of course, is obvious, and a.s.a.p. only strengthens the urgency: come AS SOON AS POSSIBLE. But m.o.s.?
Only if you work in movies you might know that M.O.S. is an old and rather strange word for "silent," and that the expression came up in the late twenties meaning "mit-out sound."
Anyway, we soon understand that the postcard was sent by a film director, Friedrich Monroe, to his friend Phillip Winter, a sound engineer. Friedrich has started a movie in Lisbon on a very romantic notion -- he wanted to do it "as if the whole history of cinema hadn't happened, shooting all on his own, a man alone in the streets, with an old hand-cranking camera, just like Buster Keaton in THE CAMERAMAN."
Well, Friedrich failed, and when he realized he had painted himself into a corner, he called Winter for help, hoping "that your microphones could pull my images out of their darkness, that sound could save the day."

Storyline
The director Friedrich Monroe has trouble with finishing a silent b&w movie about Lisbon. He calls his friend, the sound engineer Phillip Winter, for help. As Winter arrives Lisbon weeks later, Monroe is disappeared but has left the unfinished film. Winter decides to stay, because he is fascinated of the city and the Portuguese singer Teresa, and he starts to record the sound of the film. At the same time Monroe cruises through the city with a camcorder and tries to catch unseen pictures. Later they meet and Winter convinces Monroe of finishing the film. Written by Christoph Blendinger 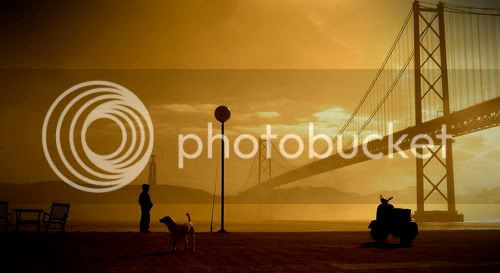 "Ah não ser eu toda a gente e toda a parte!". This phrase (roughly translated as "Would I be everybody and everywhere!"), written in one of the walls of the house where Winter's staying, is the last verse of "Ode Triunfal", a poem by Álvaro de Campos, one of the three main heteronyms of Portuguese poet Fernando Pessoa.
Posted by Andreea Diana Tanasescu at 4:13 AM 0 comments