Catinca, Lula and The Magic

This year in february, I received a request for Catinca from Lula Magazine, a poetic and somehow cinematic fashion magazine. Later in the summer, one day, one photographer from New York wrote me an email telling me that he is assigned by Lula to do the fashion editorial with Catinca. From his emails he seemed to be a very kind and warm person. I met him in the airport and I knew from the very first time that he has wings.

His name is Martin Sanmiguel and here is a glimpse from our magical journey in Bucharest and Sighisoara. 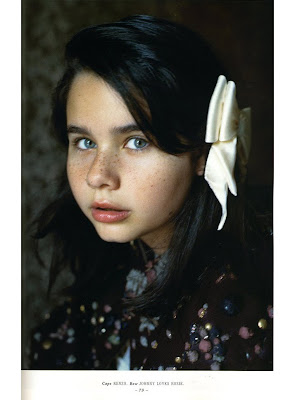 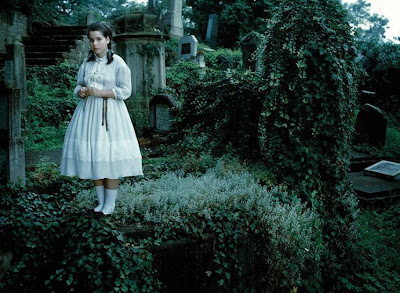 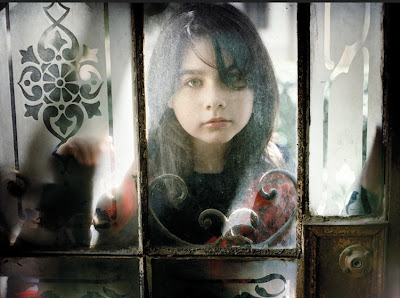 Today I checked some statistics about Catinca on Twitter. From Twitter a link has challenged me to search more. Then the algorithm of Google has brought me a lost story. It was Catinca's blog on Myspace and a post that she made on September 2008, 6 months before Lula's request. I was stunned. Her powerful subconscious has predicted almost perfect her story from Lula Magazine. Only a pure soul can create this kind of magic.

sasha and the town

She has big blue eyes. long dark hair in two pony tails. She is wearing a beautiful girl dress and I always see her in a field with tall grass and multicolor flowers which smell exactly the same as the flowers on the field where I have rode beautiful Luck at Sighisoara.
She is named Lula and she is 5, maybe 6 years old. I see her calm, I look at her in the eyes and I saw she is sad. I thought she was always happy, so then I saw her big blue and sad eyes I refused to believe that Lula is somehow unhappy." I am just dreaming "I said to myself. Lula always laughs, about everything. I've never saw her sad. I went to her and asked her what happend, why is she sad." Leave me alone Sasha!" She said. After that I realized that Lula was the child inside of me and that she needed all my affection. From then I always remembered about the child inside me and accorded him a lot of attention every day.-story by Sasha (a girl who published her story in a magazine)
Posted by Andreea Diana Tanasescu at 7:08 PM 0 comments

Email ThisBlogThis!Share to TwitterShare to FacebookShare to Pinterest
Labels: catinca untaru, my life

I have never written about Catinca, but I spoke of her a million times. Catinca comes from a fairytale. I often look at her and and have the feeling that she is surreal. She inspires me to believe she is an elf.

Catinca is the resort that set things in motion with my project, 10. She has special powers that she is not aware of yet. I have always known that she would bring something special in my life and in the lives of those around her.

It happened while I was doing the casting for The Fall. It was a fortunate coincidence that I got to do a casting at her kindergarten and the principal recommended her insistently. I agreed to see her, even though she was older than what we were looking for. Our first meeting was incredible! I was casting in a kindergarten classroom, where all furniture was very small sized; I felt like Gulliver in the land of the dwarfs. When she came in, she sat in a little chair in front of me and gave me a photo album with pictures from when she was a baby. For minutes, I wasn't able to ask her anything because I was somewhat hindered by her reaction. She looked at me, curious, shy, unbelievably attentive… I was absolutely struck with her gaze that I could feel burning on me, and I was too embarrassed to lift up my eyes to her, as if I had just entered a forbidden world of the elves where the roles of investigation were inverted irrevocably. She was dainty, and ethereal, but I was looking for someone else – a small, thin, dusky little girl, with big, dark eyes. We had a simple discussion, and it was enough, because her state was so special that I needed no confirmation of her intelligence or acting talent. I decided to call her for an audition, well knowing that directors can change their minds about the outer appearance of their characters.

We saw each other again at the beginning of December 2003, after she had passed the first selection. At the first video session she came with her grandfather. I remember I had just read a book about Nadia Comaneci by Ioan Chirila, where Bela Karoly, Nadia's coach, said that a very important tool for him for selecting gymnasts was observing their parents. If the parents were not corresponding physically and empathetically, he would refuse the young gymnasts, as talented as they had been. I often applied this method, including in the case of Catinca. Her grandfather looked like a fairytale grandfather, like a character from the interwar period in Bucharest that I could almost see standing in the doorway of a candy store, surrounded by hordes of children, smiling, affable, and generous.

We saw many children that day, but the image of Catinca with her grandfather were by far the most special to our minds. This association served to bring even more focus on her little figure, and the audition strengthened the conviction that she was perfect for the part. I realized that it was not at all acting with her, that she was merely playing, with the most heartwarming candor. Watching Catinca, so genuine and pure, so innocent and powerful, I remembered just how incredible childhood is. I could write volumes on this subject! I think, when I have the time, I will.

Evidently, the long series of casting calls ended with her as the absolute winner. She had competed with children from around the world, and her success was on the emotional level rather than the more rational questioning. We were wondering how she was going to hold up during filming (3 months long, on 3 continents.) We discovered she has a fantastic strength, that she is extremely resilient and very serious. Almost like an adult. Catinca has the mindset of a director rather than an actor. During filming, she would spend time analyzing what was going in every shot, then she would build her own frames, and use her ebullient imagination to conceive small scenes inspired by what was going on on the set and the discussions of the adults…

Catinca was raised in the fairytale world. Her grandfather confessed that he must have read a thousand stories to her growing up, and that she never grew tired of them, and of stepping into that otherly world. She learned English from a flight attendant who kept her attention vivid to a story about her air travels, about how she would borrow the accent from every country she visited. It's quite a smart story that became hilarious during the filming of The Fall, because Catinca would "steal" the accents of the country she visited. The director ended up having to redo all of Catinca's lines in the film, because her accent changed from country to country.

Catinca is a total fairytale addict, without even suspecting anything unreal about them. She is both happy, and sad, laughing and crying when she goes deep into the story. Her sensitivity is extraordinary. Probably this sensitivity is her key to the imaginary and the supernatural. I think she inherited it from her mother, with whom she has a wonderful relationship. For Catinca, the greatest joy is being cast in The Fall and set on a marvelous journey with her mother. Many times I felt like they were more like sisters or the best of friends than mother and daughter.

When she wants to, she can be extremely funny. The trick is for her to feel comfortable and safe. She can make you fall down from the chair laughing. She is very self-reflective and honest. I remember that she loved listening to Tarsem tell the story of how she was first perceived on the movie set. The entire team was expecting to see a skinny, woebegone little girl, but to the amazement of many, this fluffy little girl shows up, striding around like an elephant shouting, "A butterfly! A butterfly!..." She laughs with thunders when she hears this story.

Catinca is a very special child. She is not a mere child actor or a child star. She is entirely a fairytale


Here is her first headshot 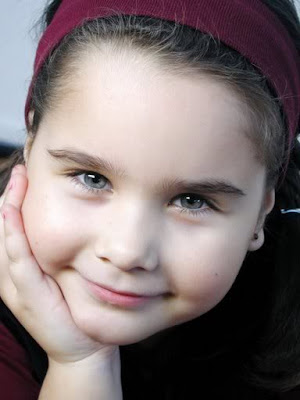 Only the kids know better. The urban design potential of snow

In Bucharest it is like in fairy tales. The snow has saved the magic. Time to reflect about the divine scenography.
Here is a great article from The Design Observer written by Sergio López-Piñeiro about the potential of snow in urban design.
Sergio López-Piñeiro is an Assistant Professor of Architecture at the State University of New York at Buffalo.

"We are conflicted about snow in cities. With the first storm of the season, the city becomes silent, bright and spatially renewed — the snow absorbs the sounds of traffic, reflects the low winter sun, and makes irrelevant the signs that warn “Keep off the grass” or “Stay on the path.” Yet we react to the new-found peacefulness by combating the fresh snow, by salting roads and sidewalks and revving up noisy plows and diesel blowers. In cities we constantly push around the snow — we move it out of our way, shovel and plow and mold it to ease our commutes and comply with regulations. It is contradictory: we react to the serene landscapes of new-fallen snow with loud and mechanized aggression.

No wonder that we have responded with so little creativity to the poetic presence of snow.

Only the kids know better! " 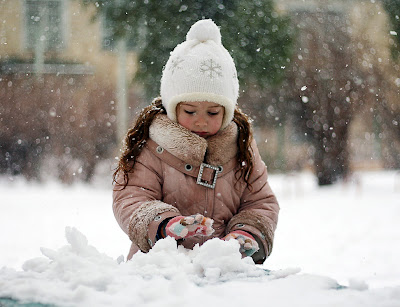 Picture by mechtaniya from Russia posted on Deviant Art
"All hello! I young mum, the photographer, have a daughter of Alinochku whom madly I love and often I photograph"
http://mechtaniya.deviantart.com/
Posted by Andreea Diana Tanasescu at 4:53 PM 0 comments