The Tree of Life - a new cosmic film

Most anticipated movie of 2011 The Tree of Life written and directed by Terrence Malick starring Brad Pitt and Sean Penn.

I really like Brad Pitt's vision about the sci-fi perspective of this film :
"Well, in a way. It's this little tiny story of a kid growing up in the 50s with a mother who's grace incarnate and a father who's oppressive in nature. So he is negotiating his way through it, defining who he's gonna be when he grows up. And that is juxtaposed with a little, tiny micro-story of the cosmos, from the beginning of the cosmos to the death of the cosmos. So that's where the sci-fi – or the sci-fact – comes in."
via Empire 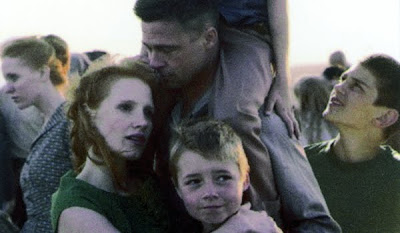