Email ThisBlogThis!Share to TwitterShare to FacebookShare to Pinterest
Labels: WATER

One - Swedish house mafia (Your name) from ldelarosa on Vimeo.

Rebooting Business and the World

Friday evening I had the opportunity to attend a great event for my future : Don Tapscott's lecture at London Business School.
He is one of my favorite digital thinkers, not only because he wrote "Grown Up Digital: How the Net Generation is Changing Your World " , but mainly because he advocates listening to young people and acting on their input. This is for sure the main focus of my current life challenge.

At LSE "he talk “Rebooting Business and the World” argued that many established institutions have become atrophied because of the global financial crisis but that a new open network model built around collaborative technologies available through the web provide incredible opportunities to address key challenges in the environment, transport, government, education and health care."
You can read here a short brief of his talk written by Geoff Riley, formerly Head of Economics at Eton College and he is also co-Founder of Tutor2u.

The lecture has finished with a beautiful introduction of “Smart Swarm: Using Animal Behaviour to Organise Our World”. Many thanks to Don Tapscott for invite. He is a genuine pioneer, as Lucian Tarnowski describes him ;)

Posted by Andreea Diana Tanasescu at 9:14 AM 0 comments

You can’t make great movies if the world doesn’t amaze you.

I have to recommend you a great film reviews blog and a fantastic writer.

http://moviewaffle.com/
I've discover it two years ago while I was surfing on web about THE FALL. Moviewaffle was at the beginning at that time but now after two years it looks like a everybody loves it ...It was longlisted for Wales Blog Awards 2010 (Best Writing) .

Here is one of the best reviews of The Fall directed by Tarsem Singh written with passion and truth by moviewaffle.com ... 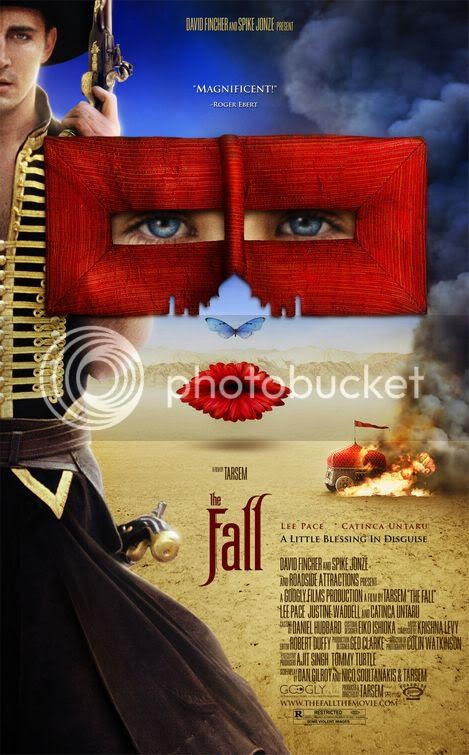 The Fall – A Review

The greatest special effect is the close-up. Every vista pales in comparison with the human face. Because without that face – what do you connect with? What moves you? The desert might be a character in Lawrence of Arabia, but its performance is opaque. What makes Lawrence is Peter O’Toole. The same way – in Apocalypse Now – Marlon Brandon shows you what the jungle is thinking. In director Tarsem Singh’s breathtaking movie, The Fall, there are sights that equal anything David Lean or Francis Ford Coppola accomplished. And there is also a little girl (Catinca Untaru), whose face knocks every other wonder into a cocked hat.

The story is about a stuntman in Hollywood in the 1920s. He has fallen, both literally and metaphorically (the movie – while breathtaking – isn’t subtle). He’s in hospital. A famous actor has seduced the stuntman’s girl. Of all his injuries, this cuckolding is the worst. The stuntman becomes addicted to morphine. Bedridden, it’s hard for him to maintain a constant supply. He befriends a little girl (hospitalized after – you guessed it – a fall) as a ruse so she’ll steal morphine for him. In return for her help, the little girl keeps bugging the stuntman to tell her a story. He does – and it’s breathtaking – but as the story unfolds, the morphine takes over…

Tarsem Singh spent four years making The Fall. In eighteen countries. With his own money. And Catinca Untaru still steals the show. In interview, the director speaks of how he couldn’t have made the movie till he found the right girl. And he was right. When a movie is this dazzling, it needs reality. Untaru has never acted before. With luck, she will never act again. Not for Sophia Coppola-type reasons, but because: she’ll never be this good. Non-actors get one shot at a perfect performance. Then they become actors. There are reaction shots The Fall catches from Untaru that one actor in a million could replicate. Tarsem Singh’s best decision was to let this little girl dictate how every other actor behaves. When Lee Pace (the stuntman) is with her, you’re watching an actor unlearn acting. And be better for it. Because acting is play time. Would that every movie had the luxury of children playing children instead of “child actors”.

So what do we see? Some examples: the desert; a wall of sand that looks a thousand feet high; a lone rider like an ink smear on the dunes. Or how about an island in the shape of a butterfly; blissfully white; set it in a billowing blue ocean. Or a dead tree sprouting into flames. Or an aqueduct designed by M.C. Escher. Or a wedding couple ringed by whirling Dervishes. Or tiny birds flying out of a man’s mouth. Or – Beauty. In essence. The Fall is “the full meal” (as a wise teacher of mine once phrased it). It is absurd, sensual and (my favourite) unabashed. It puts me in mind of movies like The Fountain, where the audience has to have the right appetite. You either gorge on such movies or you’re bored by them. Cynics will only gag.

While spirituality might seem ham-fisted in Singh’s handling of it (“Are you trying to save my soul?” the stuntman asks, repeatedly), like Darren Aronofsky, the soul of his movie isn’t there in words, it’s grasped holistically, through the movie. To put it another way, The Fall would be about the soul if the stuntman and the little girl talked about cornflakes. Like a great song which leaps the boundaries of its form; the message isn’t the words, it’s the music.

It’s easy to wear-out a word like “breathtaking”. How good can it be? we long to sneer. But great movies come from a director’s childish awe at the world. You can’t make great movies if the world doesn’t amaze you. How else to explain the power of the close-up? To look at something so intently that – for a few seconds, a lifetime – it engulfs you. Human faces are the best kept secrets told by close-ups. Most of us still retain the capacity to be awed by a desert or an ocean. And the deserts and oceans of The Fall are awe-inspiring as any in movies. But that one little girl. We’d miss her. She and everyone else who’s ever given a great performance on-screen. Because great acting is only half of it. For the other half: you have to look close.

I am an English teacher by day, and I’m often fairly busy, but a friend kept bugging me to write and so write I did (let that be a lesson to anyone who ever had a dream for someone else).

As far as intentions for the site go, I intend to write about movies I have seen. Some of them will be new releases, some of them will be old favourites and some of them I’ll review because my friend asks me to (I’ll bet he has plans). These reviews will not be fact-checked and will often, doubtless, contain inaccuracies and things I’ve remembered wrong. But they will also, hopefully, contain some thoughts you may agree with, and they will be written carefully, with care for the movies as much as where the commas should go.

If this site were a cinema it would be a small one, with only sort-of comfortable seating. It’s a pre-multiplex site: you come for the movies.

The closest I ever came to getting shot was in Florida.

It was summer, and I had an AK47 pointed at my feet. The gun wasn’t mine, but it was my finger on the trigger. I had been handed a machine gun by a friend – partly for fun, partly to test my masculinity – and now, with a paper target taunting me like a raised middle finger, I was aiming low, in order not to lose control of the gun and kill everybody.

AK47s are lighter than you expect. They’re nearer the weight of an empty body bag, rather than a full one. However, far from being emboldened by the unexpected lightness of my gun, I was convinced that, when I pulled the trigger, the bastard thing would leap for my chin like a dog with iron teeth. So I pointed it down, as if ordering: “Sit”.

I was already nervous, after being told that I could burn my hand if I touched the barrel after firing. But the image of me, post-massacre, breaking my chin with the murder weapon…was too much.

I paused. There was something at stake beyond hitting the target. If I handed the gun back, I’d be coward. Not in the he-left-his-buddies-in-a-firefight sense; not even because I feared killing everybody, but because I’d have avoided risk.

Pulling that trigger was necessary to my life.

(This is pretty much how I’d describe reviewing)
Posted by Andreea Diana Tanasescu at 7:38 AM 0 comments